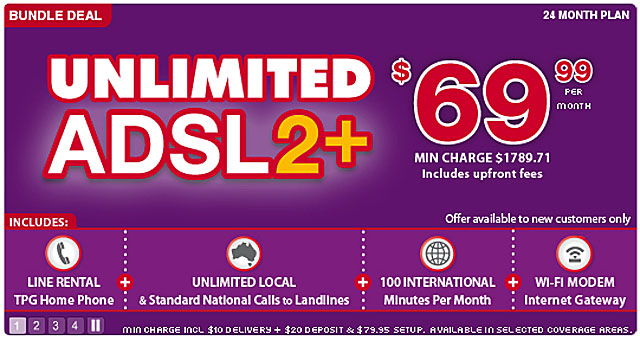 news The full Federal Court has largely reversed an earlier decision by a single judge which had found that TPG’s advertisements of its $29.99 ‘unlimited’ ADSL and telephone bundles had been misleading, forcing the Australian Competition and Consumer Commission onto the back foot in the case.

In a statement, the ACCC said it was currently reviewing the Judges’ reasons in the case. “The ACCC will continue to take enforcement action to improve clarity in advertising in the telecommunications industry as a priority,” the regulator stated. The judgement is likely to mean that TPG will be required to pay a substantially smaller fine, as $1.4 million of the initial $2 million fine related to revised advertisements — which the court found were not misleading.

opinion/analysis
Given how many people have whaled on TPG over these ads, and how many articles Delimiter has already published no the issue, I thought it necessary to note this common sense judgement in late December. And, as you’ll recall, I called this one right from the start. In December 2010, I wrote:

” … it’s not often your humble writer sides with TPG. We delivered the company a bit of a rebuke when it bought PIPE Networks, we’ve been known to opine about the strength of its customer service in the past, and we typically tend to recommend either iiNet or Internode to others when they ask us which ISP they should source their broadband from.

With this in mind, we have to ask: Has the ACCC gone too far with this lawsuit? Have Graeme Samuel and co bitten off more than they can chew?”

Let’s hope the ACCC will be a little more careful with its lawsuits in future. And we do wonder whether this victory (we doubt the ACCC will appeal this to the High Court) will see the return of TPG’s $29.99 plans.