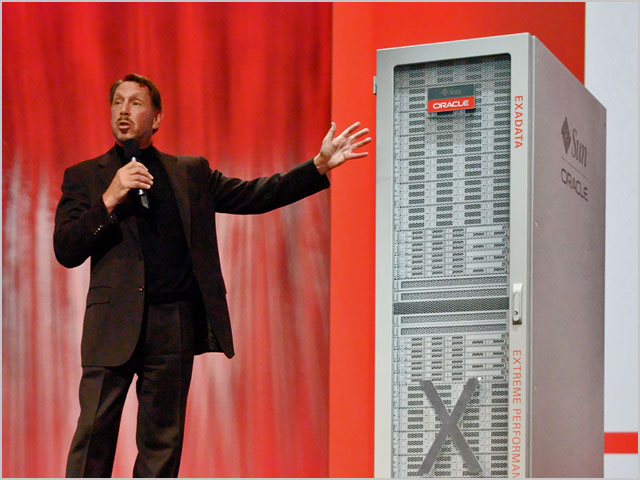 news Oracle has revealed that it signed a wide-ranging $63 million contract with the Federal Department of Defence earlier this year that will see the US technology giant supply virtually all of its major product lines, ranging from its popular PeopleSoft, Database and Fusion products to its Exadata hardware and even its Exalogic Elastic Cloud technology.

In a statement released late last week, Oracle noted that the four year deal would assist Defence in rationalising and upgrading its ICT infrastructure, at a cost of $63 million. As part of the package, Oracle will supply its PeopleSoft, Database 11g, Fusion Middleware, Identity Management, Weblogic, Service Oriented Architecture, Business Process Management, GoldenGate, Policy Automation, WebCenter Portal, Business Intelligence, Enterprise Manager and its Exadata Database Machine and Exalogic Elastic Cloud products. It is very common for large enterprises to purchase more than one Oracle product or solution as part of their engagement with the supplier, but the breadth of products the Department of Defence is procuring from Oracle is unusual for Australian organisations; reflecting the size of Defence’s IT operation and stature as one of Australia’s largest consumers of corporate IT solutions.

The software giant said the deal –signed in late May this year but only revealed this week — would help Defence’s efforts in migrating from a highly complex enterprise architecture, featuring more than 3,000 applications, to “an integrated, rationalised and standardised suite of architecture solutions”, with a substantially reduced total cost of ownership factor to be realised along the way.

Perhaps the centrepiece of that migration effort will be Oracle’s assistance in Defence’s efforts to upgrade and modernise its diverse payroll and financesystems as part of the JP2080 joint project, detailed here online.

Defence currently operates several major payroll systems – the high-profile PMKeyS, which broadly supports the force’s civilian remuneration (although it also supports the armed forces somewhat), and the Central Reserve Pay System (CENRESPAYII). CENRESPAYII is the system at the centre of Defence’s remuneration debacle in 2008 which saw some officers receive incorrect payments. A separate system, ADFPay, generates what Defence describes as the “allowance” component of the armed forces remuneration. One of Oracle’s largest third-party partners in Australia, Red Rock, won a contract in May 2010 to conduct a smaller upgrade, with $16 million, of PMKeyS.

“One of the key projects to use the new infrastructure software will be JP2080 which recently received first pass approval,” said Oracle in its statement last week. “This project will upgrade and modernise the Department’s existing Oracle PeopleSoft solution which will support Defence’s HR and Payroll services to more than 100,000 full-time and reservist personnel. The project will provide a modern infrastructure and application capability to assist in delivering to Defence increased efficiencies, flexibility and Shared Services.”

Matt Yannopoulos, Defence chief technology officer, said in Oracle’s statement: “Oracle’s relationship with Defence goes back almost 20 years and we are delighted to be extending and elevating that relationship through this agreement. With Oracle’s help, we will be able to modernise and consolidate our IT environment to boost the ability of our IT staff and systems to provide value, increase efficiency and support innovation,”

And Farr added: “With just under 81,000 full-time personnel and active reservists, we needed a consolidated HR solution that would enable us to transform the way we deliver HR and talent management services across all arms of the Defence Force. Oracle has provided us with this modern platform and has provided a partnership to ensure its success for the future. In particular, HR analytics will help us better understand our workforce, including identifying high quality applicants, improving employee retention, reducing absence costs and designing compensation that rewards performance,” said Greg Farr, Chief Information Officer, Department of Defence.

“This is a very significant partnership for Oracle and one that we consider of utmost importance given Defence’s critical role in protecting Australian citizens at home and abroad. The transformation will reach every corner of Defence’s IT environment and will see substantial improvements in efficiency and a marked reduction in Total Cost of Ownership in alignment with Defence’s Strategic Reform Program,” said Ian White, Senior vice president and regional managing director, Oracle ANZ.

opinion/analysis
There’s several interesting things to take note of in this deal between Oracle and Defence.

The first is the timing. In its statement, Oracle made a point of noting that its contract with Defence was inked on 28 May this year. Defence watchers will note that it was only a few days later that Defence CIO Greg Farr fronted Senate Estimates in Canberra and noted that he expected Defence to win government approval for the replacement of PMKeyS over the following twelve months.

Now, I’m personally not quite sure what this means; to my knowledge, and I haven’t been following it as closely as I could want recently (happy to be corrected here), the major contracts for the PMKeyS replacement projects have not been awarded quite yet. I interpret Oracle’s involvement in JP2080 mentioned in last week’s media release as constituting the supply of updated Oracle software for support systems for that project; especially where Oracle systems (ie PeopleSoft) are already being used and tinkered with by people such as Red Rock.

Why do I think this? Because JP2080 is, as a whole, a massive project worth exponentially more than $63 million; in the scheme of Defence, $63 million is actually a piddling amount; pocket change. It is, however, a decent amount for a contract which would consolidate a bunch of other Oracle contracts into one heads of agreement deal which would see Defence gain access to virtually all of Oracle’s software lines for the next few years, with some juicy Exadata hardware bundled in. I don’t think Defence has really awarded the key PMKeyS and other payroll/finance work yet, and when it does, I would expect that project to go to someone like IBM, and be worth hundreds of millions of dollars. Oracle will play into that; but I don’t think this deal is the biggest by far of the lot which Defence will award in this area over the next several years.

Secondly, it is very notable that Defence has decided to utilise Oracle’s Exadata machines. As I’ve previously written on Delimiter, it has been fascinating seeing the progress which Exadata is making in Australia. I would go so far as to call these machines, so controversial when Larry Ellison first announced them, ‘mainstream’ at this point. Oracle’s sales team has been doing an excellent job of getting Australian organisations to buy them, whether large organisations such as Defence or medium-sized ones.

New Defence CIO Peter Lawrence will have a lot of stuff to get his head around when he takes over. Defence’s current CIO Greg Farr finishes up this month.