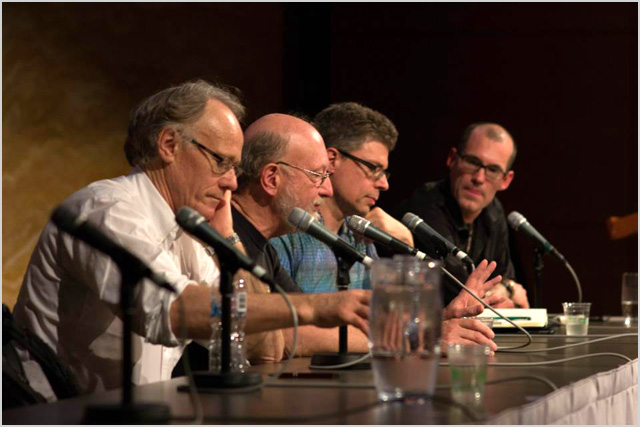 This article is by Sydney-based writer, photographer and videographer Munir Kotadia. For more of Mun’s work, check out his excellent YouTube channel.

interesting thoughts With half the worlds population now connected by mobile phone and even short periods of time disconnected from the global network leaving many with withdrawal symptoms, the next stage of human evolution is approaching fast and if you’re having trouble keeping up, look to nature.

This was the consensus at a panel discussion held at the Origins of Consciousness Tour in Sydney last month that comprised of technology writer Mark Pesce, best-selling author Graham Hancock, Ethnopharmologist Dennis Mckenna and film maker Mitch Schultz.

“There are now six billion sim cards in the world and 3.2 billion individuals have mobile phones – and that all pretty much happened in the last five years,” said Pesce, who is currently working on thenextbillionseconds.com, a project that attempts to explain the result of everything becoming connected.

“Every one of us are now walking around connected to [more than] three billion other brains. You are not allowed to carry your mobile into a bar for trivia night anymore because when you do, you are carrying the rest of human knowledge with you … It’s incredibly easy to find the truth because you can go to the experts who understand what that truth is,” he told delegates. “That means we are now functioning inside of a global mind — it’s not what we expected.”

Dennis McKenna — brother of the late Terrence McKenna — described the proliferation of sim cards and smartphones as an “extrusion of the human nervous system”. “Right now [the network] runs on phones and sim cards but there may come a point where we go to some nanotechnological implementation — what about the iPhone 15? What is that going to have? I suspect you won’t even be able to see it. Maybe it will be a capsule that you will swallow or put under your skin and you are connected all the time. It will be virtually indistinguishable from telepathy,” he suggested.

Mitch Schultz thinks we are already at that point. He recounted a conversation with a friend who wanted a communications chip implanted in her body. After a very brief exchange they realised that the only time her mobile phone was more than a meter away from her body was while in the shower. “And I said, ‘you need an implant because?’.” At this point a delegate seated at the back barked “Because of the battery life.” But unfortunately the remark was unheard by the panel.

McKenna described how, on arriving in Australia from the US, he experienced withdrawal symptoms when finding himself disconnected. “I checked into the hotel and my internet wasn’t working and for about four hours and I’m in this state of total high anxiety — it’s like having a stroke or something — half my nervous system wasn’t working,” he said.

“Those are withdrawal symptoms,” said Schultz. “It happens to us because we switch instantaneously between a connected and disconnected culture… Connectivity is good too but we have forgotten that all the disconnected time we had before was really important because it was all that we ever had.”

Global culture emerges
This desire and ability to be continuously connected means that for the first time, a mainstream borderless culture is emerging.

Pesce said evidence of this culture is the incredible popularity of the Gangnam Style music video. It’s been played more than 531,000,000 times on YouTube. “The other night coming home from a web developer conference I was walking by a bar and heard Gangnam Style pouring out. I realised we are living in a William Gibson future … it had this quality to it that felt like yes, this is what the future was supposed to be, this is what we were promised,” said Pesce.

Hancock described Gangnam Style and other memes as “trivia which is clogging the global synapses” and questioned whether it was “raising the consciousness”.

However, Pesce argued that “one man’s trivia is another man’s gold”. “With Gangnam style I see Korea as an actual cultural force and that is brand new and that has not ever happened before. Just like the British [music] invasion in the 60’s we are now seeing the Asian music invasion, which becomes part of the world culture,” he said. “It’s a fun song and it’s meaningless but half a billion people have had a shared experience.”

Hancock, who admitted that his wife and daughter were more likely to check his emails than himself, agreed that connected humans have changed modern consciousness. “Sometimes it isn’t just the Gangnam Style, sometimes it is the Arab Spring, sometimes it is Occupy Wall Street, sometimes it really is making a difference and structures are coalescing around the facilities that the internet makes available. “As a researcher, operations that took me weeks or months in the 1980’s take minutes now and that is an incredible enhancement of ones power to investigate and dig deep,” added Hancock.

Creativity, evolution and survival
Speakers at the event discussed how human consciousness developed and argued that humans evolved from animals with relatively rudimentary creative abilities to what we have today by exploring alternative consciousness using naturally occurring substances such as DMT which are common in nature and have been used by Sharman for thousands of years. They said that modern society needs natures help to bring about the creativity required for humans to work through the current global problems and continue our evolution.

One example of a modern day icon who who admitted to using psychadelics in this way is the late Steve Jobs, who called his encounters with LSD “a positive life-changing experience” and one of “two or three of the most important things” he had ever done in his life.

Electronic Arts founder Trip Hawkins, who worked at Apple until 1982 and described Jobs as “the walking embodiment of creativity”, told Forbes that Jobs believed people who have not experimented with psychedelics were not as able to solve problems creatively. This is the same point most speakers at The Origins Of Consciousness Tour were making — that learning from an alternative state of consciousness induced by natural ‘technologies’, shouldn’t be demonised because this creativity may be necessary for humans to take the next step without blowing ourselves up and/or destroying the environment.

Can you imagine what an iPhone 15 might look like? How do you deal with internet withdrawal? Should the state decide what we are allowed to experience in the privacy of our own minds? Would Apple be where it is today if Steve Jobs hadn’t taken LSD? Please share your thoughts in the comments section below.