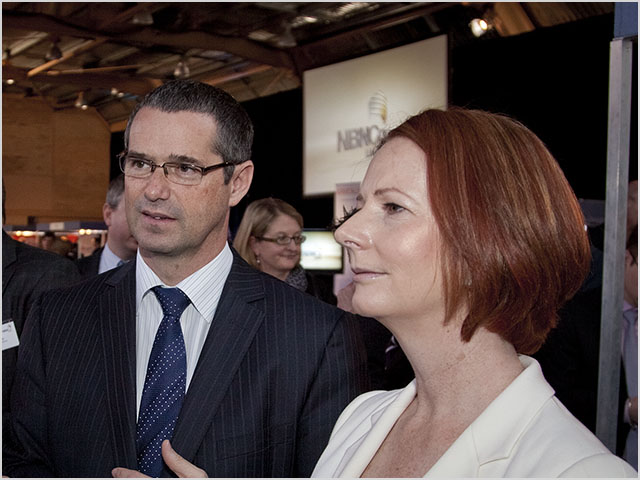 news Communications Minister Stephen Conroy this afternoon demanded his opposite Malcolm Turnbull release the Coalition’s rival National Broadband Network policy, after the Liberal MP admitted to the Financial Review newspaper this morning that the policy was “ready”.

The newspaper this morning quoted Shadow Communications Minister Turnbull as stating that the Coalition had a fully costed policy document “ready” to be released, based along similar lines as the fibre to the node rollout currently being implemented in the UK. Turnbull also slammed certain “specialist technology journalists” who he said were “fanning a pro-NBN zealotry among tech-savvy citizens”.

In a follow-up statement release this morning, Conroy called on Turnbull to stop “hiding” from the Australian people and release the Coalition’s broadband plan. “In an interview with the Australian Financial Review, Mr Turnbull says ‘we do have our policy ready’,” Conroy said. “If that is the case, what is the hold-up? Instead of accusing Australian IT journalists of being NBN-zealots, he should reveal his plan in detail.”

Conroy said Turnbull had identified British Telecom as the model for Coalition policy. However, in doing so, the Communications Minister alleged, Turnbull had ignored the fact that BT is a vertically integrated incumbent telco — like Telstra in Australia. “Is his plan to get Telstra to build a fibre to the node network and give Telstra back its monopoly?” Conroy asked. “Or is he planning to have NBN Co buy back Telstra’s ageing copper network, with its estimated $1 billion annual maintenance bill and establish a new government monopoly called Network Co?”

Conroy further questioned whether Turnbull’s rival NBN policy relied on the use of the HFC cable networks operated by Telstra and Optus, as the Liberal MP had stipulated in the past. “How will he ensure these networks are upgraded to be open access, are connected to apartment blocks, and can provide business grade services?” asked Conroy. “What year will Mr Turnbull finish the Coalition’s FTTN network? Will it only be finished in 2020, as predicted by Goldman Sachs? It is time Mr Turnbull came clean and released the Coalition’s broadband plans for public scrutiny.”

The Gillard Government’s current NBN policy being implemented by NBN Co predominantly focuses on using a fibre to the home rollout in which cables are deployed from centralised points (usually telephone exchanges) all the way to home or business premises around Australia. The Coalition’s rival plan appears to focus on using fibre to the node-style technology, in which fibre is deployed from telephone exchanges to neighbourhood cabinets or ‘nodes’, with the remaining distance to premises to be closed by the existing copper cable.

In the UK, BT is using a FTTN-style deployment to provide speeds of up to 80Mbps to two-thirds of UK premises by the end of 2014. Some areas are also being upgraded to FTTH infrastructure on demand.

The comments by Turnbull and Conroy today come as Turnbull has faced new criticism of his plan by prominent business and finance commentator Alan Kohler, who in an article yesterday argued that the Coalition’s rival National Broadband Network policy was unworkable, as the Government’s existing fibre to the home-based NBN project would be too far advanced to stop before the next Federal Election and that the Coalition’s fibre to the node-based alternative would require negotiations with Telstra which would see the balance of power overwhelmingly shifted to Telstra’s side of the table.

The news also comes as Turnbull’s office has not responded to a list of questions regarding the Coalition’s FTTN plans forwarded to it last month, following a fact-checking exercise conducted by Delimiter into an article Turnbull published in July strongly pushing for the potential for the NBN project to be modified to focus on fibre to the node technology instead of its current fibre to the home rollout.

At the time, a consensus had appeared to develop amongst those commenting on the National Broadband Network project on Delimiter that Turnbull needed to provide more evidence that Fibre to the Node is the best style of broadband infrastructure rollout for Australia’s long-term telecommunications needs. The questions were:

opinion/analysis
It’s hard not to agree with Conroy that Turnbull should publish the Coalition’s rival NBN policy, if it has developed one and had it fully costed already. It is very hard to meaningfully debate the Coalition’s position on the issue without knowing what it is; and it is important that issue be debated at length before the next Federal Election. The differences in the two sides of politics’ broadband policies was a key deciding factor in the previous 2010 Federal Election, according to a study conducted by the Liberal Party into the results.