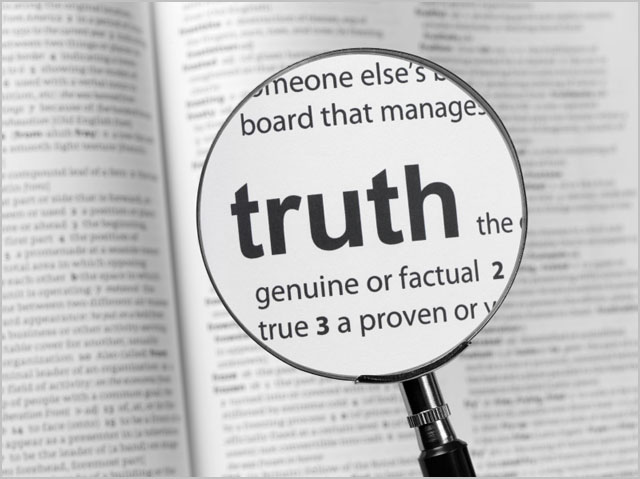 Last week, the Federal Government published NBN Co’s latest corporate plan, covering the years up until 2015. Following the publication of this document, Liberal MP and former Optus executive Paul Fletcher published an article on his website containing a number of criticisms of the project. Fletcher’s website is currently not available, but the article is also available on the website of the Financial Review. In general, it alleged that the new corporate plan showed NBN Co had not delivered on its original promises, and that the company’s performance was not comparable with that of similar private sector projects.

Following the publication of the article, Delimiter invited readers to help fact-check Fletcher’s comments, in the interests of keeping the debate over the National Broadband Network objective and based on fact. This article is a follow-up to that article and the discussion amongst readers it created.

The first contention in Fletcher’s article is that when the current NBN project was initially announced in April 2009, that the Government promised it would be “operated on a commercial basis . . . and involve private sector investment”. This statement is true. The transcript of Prime Minister Kevin Rudd’s speech on the day can be found archived online.

Fletcher then goes on to state that in mid-2010, Communications Minister Stephen Conroy abandoned this commitment to private sector investment, after receiving advice from the NBN implementation study conducted by consulting firms McKinsey and KPMG that private investors would regard the project as too risky.

He then links this statement to a claim that NBN Co is “hopelessly behind its targets” when measured against its first corporate plan released in late 2010 (PDF), appearing to imply that perceived concerns by private sector interests that the NBN was too risky a project to go ahead with were legitimate as it had not met its targets. “If NBN were funded by private sector investors, the CEO would probably have been fired by now, and the rollout might already have been shut down or seriously scaled back,” wrote Fletcher.

However, close examination of the NBN implementation study reveals that Fletcher’s statements are misleading as they do not reflect the full context or nuance of what the McKinsey report actually found. Quoting from page 368 of the report:

“Government should retain full ownership of NBN Co until rollout is complete. Private sector investors will require a high return on their investment due to a different assessment of the risks and rewards of the NBN initiative to Government (eg different perceptions regarding Government’s commitment to completing the project and of appropriate compensation for risks). In addition, taking on private sector equity will be detrimental to the pursuit of the Government’s policy aims that include social objectives as well as achieving widespread coverage and increasing competition. These considerations relate to both traditional methods of raising equity as well as issuing equity for vended-in assets.

In short, although McKinsey and KPMG did find that private sector investors would not find the NBN’s projected return on investment to be high enough due to perceived risks involved in the project, McKinsey and KPMG did not find that the project was inherently risky, as Fletcher appears to argue — but that it would make a financial return on its investment. It found only that governments have a different understanding of risk than the private sector. For example, they can control regulatory settings in their favour as the Federal Government has extensively done so with the NBN — while private sector firms cannot.

In addition, the two consulting firms found that there was no need for NBN Co to take on private sector investment in the early stages of its life, and that to do so would actually hamper the project, as private sector investors would not focus on the non-financial social policy aims which the Government aims to fulfil through the NBN project — creating “conflict”.

“The need to report to private owners and to justify actions taken to secure policy goals would distract management attention from daily operations,” McKinsey and KPMG wrote. “Minor shareholders are likely to seek rights and protections that would frustrate the achievement of these goals.” This shouldn’t come as a surprise; private sector investors are obviously fundamentally interested only in maximising their own financial self-interest — not achieving broader social policy aims. But Fletcher doesn’t mention this factor in his article.

Fletcher also appears to have taken a similar approach to NBN Co’s rollout targets. He states: “The first corporate plan promised that by June 30 this year there would be 317,000 premises passed or covered on the fibre network; the actual number is 39,000. There were supposed to be 137,000 premises with active service; the actual number is 3500.” This is correct, according to the 2010 NBN Corporate plan:

But the real issue is that in his article, Fletcher does not break down the number of fibre connections NBN Co was planning to have made by June 2012 or consider extenuating circumstances in the rollout. NBN Co was actually only slated to have built some 139,000 fibre connections itself, with the rest either being wireless connections or being built by third-party companies and then transferred into NBN Co. In addition, as Communications Minister Stephen Conroy and NBN Co CEO Mike Quigley have repeatedly emphasised, NBN Co’s greenfields project has been the subject of several policy changes as new facts have come to light about the way in which NBN Co can best interoperate with new estates developers for greenfields rollouts, and this area has also been affected by the lengthy negotiations between NBN Co and Telstra — with some responsibility transferred from NBN Co to Telstra in this area.

With respect to the fibre rollout in general, as NBN Co’s new corporate plan makes clear, this has been delayed by six months by the nine month delay in the highly complex negotiations between NBN Co and Telstra over the deal which will see Telstra migrate its customers onto the NBN infrastructure and shut down its copper network. There is an argument to be made that this delay could have been taken into account from the start. However, the process is also believed to have been one of the most complex negotiation processes in Australian telecommunications history, meaning it was difficult to predict how long it would take or if it would result in a successful outcome. If you take this delay and uncertainty into consideration, NBN Co is broadly on track with its rollout projections. This is how the network rollout has performed to date and will perform in future: 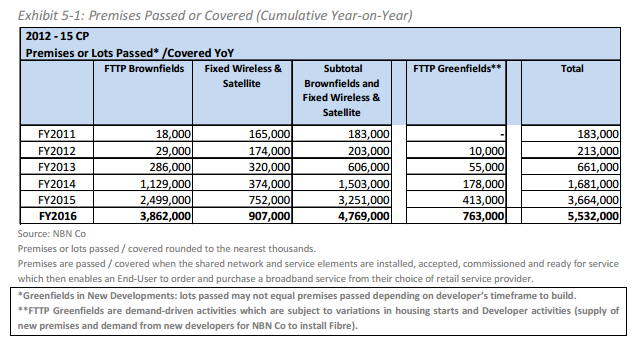 However, Fletcher acknowledges none of these factors in his article; once again focusing on headline figures but not examining the extensive background factors which have affected NBN Co’s projections over the past several years.

Fletcher also makes a number of other claims in his article which do not include context. For example, the executive points out that both Telstra and Optus deployed HFC cable networks to millions of Australians in the mid to late 1990’s. “The Optus HFC network was announced in 1994, and a rollout to more than 1.4 million households was completed by the late 1990s at a cost of about $4 billion,” he wrote. “Telstra rolled out a larger HFC network (to 2.5 million households) in roughly the same time frame. It has been more than three years since Labor announced the NBN, and we now have a grand total of 3500 premises taking a fibre service. To achieve this outcome has required taxpayers to contribute $2.8 billion of equity to NBN to date.”

However, Fletcher does not acknowledge that unlike both Telstra and Optus, NBN Co was a startup set up from scratch rather than an established telecommunications company with existing planning and managerial resources and engineering and construction staff. As Telstra and Optus did in the years before actually deploying their HFC cable networks, NBN Co has spent the majority of its first several years of life planning its network deployment. Fletcher does not mention this planning process or the fact that NBN Co has largely completed it and has signed all of its construction and equipment supply contracts; meaning that it is now in full rollout mode, with millions of Australians to receive the NBN over the next three years.

If you take into account several years of planning, the NBN will actually be delivered on a very similar time frame to the HFC networks of Optus and Telstra, to a much larger scale. Where those networks reach 1.4 million and 2.5 million premises respectively, the NBN will reach 3.5 million premises by mid-2015 — a number substantially greater than that of either Optus or Telstra. In addition, the network is much more complex than either of these two predecessors, as it will be required to provide wholesale services to retail ISPs — which neither of the HFC networks do. This aspect alone of the NBN has required a significant amount of planning. Some more detail about the history of these two networks can be found online in PDF format.

In another statement, Fletcher refers to “the collapse of Labor’s previous plan, announced in March 2007, to build a fibre-to-the-node network in a joint venture with a private-sector company, with the contribution from taxpayers to be a mere $4.7 billion”. However, Fletcher does not acknowledge that the then-Rudd Federal Government moved away from its initial $4.7 billion fibre to the node plans following an extensive and detailed recommendation (PDF) by a panel of experts at the time that the initial plan would be impossible to deploy; given that the private sector was unable to support the model proposed by the Government. It is for this reason that the Rudd Government pursued a much more ambitious, primarily Government-funded fibre to the home network.

In general, it’s hard to find direct factual errors in Fletcher’s article last week. However, it is a fact that the Liberal MP, in his article, did selectively discuss facts about the NBN rollout without giving any of the context behind those facts; as well as making links between those facts which do not appear to exist, and overly simplifying discussion one of the most complex infrastructure projects Australia has ever deployed. There are other examples we could give, but I believe the examples above are sufficient to demonstrate that Fletcher has not told the whole story about the NBN in his article last week, and has presented a limited view of the project without context or sufficient background to make his case that it is mismanaged.

From an Optus executive of Fletcher’s stature (he was the company’s regulatory chief, and dealt frequently with the Government in the lead-up to the NBN, a project which Optus strongly supports), I think the Australian public and Fletcher’s own constituency can expect more than this. More detail, more context, more understanding, and a more sophisticated argument. For a former telecommunications executive of high standing to cherry pick NBN facts out of context and use them to slam the project as a whole is, to put it bluntly, not good enough.