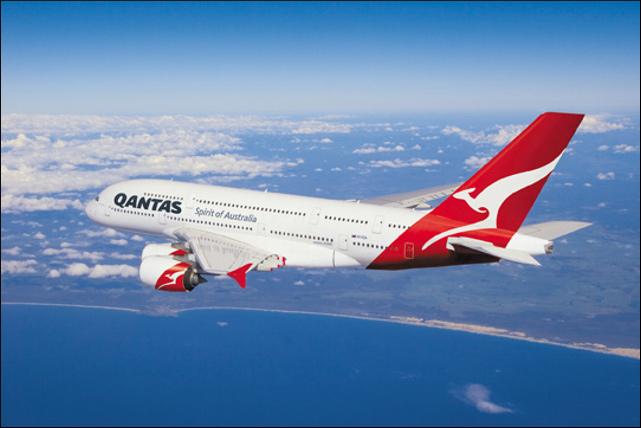 news Qantas, Australia’s biggest airline, has announced a new trial run of in-flight Internet connectivity on its superjumbo A380 for passengers on intercontinental flights between Australia and the United States. But it’s not the airline’s first attempt to bring in-flight connectivity to its passengers; in fact, Qantas has repeatedly struggled with the issue over the past decade.

In a statement this week, Qantas said six flights have been equipped with Internet technology on the Sydney-Los Angeles, and Melbourne-Los Angeles routes. Alison Webster, executive manager customer experience of Qantas, said customers would be able to access the Internet through their Wi-Fi-enabled devices such as laptops, iPhones, ipads, and BlackBerrys for the very first time.

The eight-week trial would give customers the opportunity to access the Internet in exactly the same way as a terrestrial Wi-Fi hotspot in which customers paid with their credit card to use the email, and surf the Internet, Webster said. OnAir provides the connectivity service using Inmarsat’s SwiftBroadband and global satellite-based connections, to transfer data between airborne passengers and the ground.

This trial, initially open to customers travelling First Class and Business Class, would help Qantas determine its connectivity options, and evaluate the possibility of using next generation communication platforms. Webster said that Qantas was the first airline in the world to conduct a trial of Internet services on direct flights between the US and Australia. “Over the past week Qantas has conducted some preliminary testing and is pleased to now trial the service with customers flying between Australia and Los Angeles,” Webster said.

It is only towards the end of last year that United Airlines announced its intention to have the Internet on its intercontinental flights, though domestic flights in the US had been offering the Internet for a couple of years now. At the end of 2010, Lufthansa had launched Wi-Fi on select North Atlantic routes as a beginning, before expanding to all their intercontinental routes.

Qantas was the world’s first airline to offer in-flight iPads loaded with movies, shows and music to its passengers including those in economy class, on the 767-300. Qantas used a central server on board to stream content to specially configured iPads. Interestingly these would stop working once the aircraft touched down.

However, it’s not the first time Qantas has attempted to bring in-flight Internet to its passengers. As early as 2003, as aircraft manufacturer Boeing kicked off a trial of in-flight Internet, Qantas said it was investigating in-flight email and Internet connectivity on international flights. “Qantas will therefore be watching the trial with interest,” a spokesperson for the airline told ZDNet.com.au at the time.

For several years the idea went nowhere, but by 2006 the idea had been revived at Qantas, with the airline using its website at the time to announce that it would offer in-flight Internet when it started flying its new fleet of Airbus A380 planes. At the time, the timing for Qantas’ launch was to be mid-2007.

By 2007, however, that time frame had been pushed back again to August 2008. In July 2007 Qantas announced again that it would bring wireless Internet to customers flying on its A380s. In March 2008 — although International customers still hadn’t received in-flight Internet services at that point — customers flying on domestic routes with Qantas got some hope that the airline would implement the feature on in-country flights, with the airline announcing at the time that it would introduce in-flight Internet through a mobile base station, that would allow mobile phones to access the service.

It’s not clear what happened to those plans, but Qantas certainly doesn’t encourage customers in 2012 to use their mobile phones on its planes, domestic or international. And in September 2008, the airline abandoned long-held plans to bring Internet to its international routes using the A380 craft. No real reason was given by the airline at the time, and the issue has remained fairly dormant since that time, despite the continuing interest from passangers in in-flight Internet services and the availability of such services in countries such as the US.

opinion/analysis
I will be surprised if Qantas ever manages to get in-flight Internet off the ground. The airline has been struggling with the issue for the past decade, has conducted a clutch of trials in the area, but has never quite managed to get this apparently simple technology to work well.

I regularly hear from readers who have travelled in the US on in-country flights and who have been extremely surprised to learn that in-flight Internet “just works” on some carriers there. This experience suggests that Australia’s national airline simply hasn’t been trying hard enough to bring this in-demand feature to Australia. Isn’t about time Qantas got in-flight Internet off the ground?