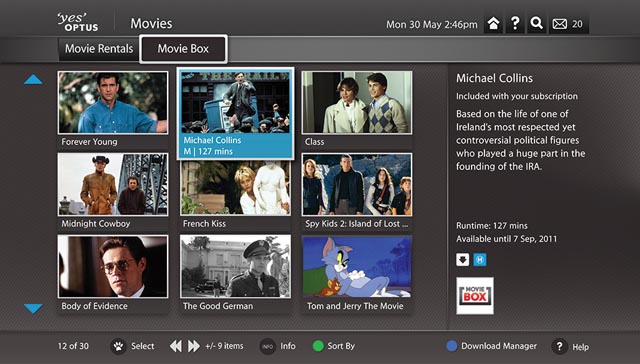 news The nation’s number two telco Optus has launched the FetchTV Internet video platform already being sold by iiNet, Internode and Adam Internet for the starting price of $9.95 a month — a charge which will be waived when customers are using its $109 Fusion home broadband and telephone bundle.

In a statement this afternoon, Optus noted it would launch the service under the MeTV brand. Like the other ISPs, Optus will offer customers a personal video recorder device to access the service.
For the starting cost of $9.95 a month, customers will get the PVR box, which comes with a built-in digital tuner and a one terabyte hard drive, the ability to watch, pause and record free to air and digital channels, and the Movie Box service bundled, which offers customers 30 preselected, on-demand movies per month, with seven new films added to customers’ roster every week.

Customers will be able to watch additional movies for between $3.95 and $5.95 (latest release) per movie, and subscription TV packs will be available for $6.95 a month — adding channels in genres such as ‘Kids’, ‘Music TV’ and ‘Factual’. More genres and foreign language channels will be added soon, Optus said in its statement.

One of the advantages which the Optus service offers over the rival FetchTV offerings being sold by rival ISPs is that Optus has created a mobile application, which allows customers to access programming information and remote record TV programs from their mobile.

“The app will also transform the smartphone or tablet into a remote control and keyboard while at home,” Optus noted. It is not yet clear which mobile platforms the app is available for, although it will be available from “late November” this year. The Optus FetchTV service will launch later this week.

Austin R Bryan, Director, Optus Digital Media said, “With an increasingly strong content line-up, thanks to our partners at FetchTV, and an innovative user interface and functionality, Optus MeTV with fetch allows Australians to enjoy a great experience through the content they love, at a time convenient to them.’

“The way we consume content is rapidly changing. Optus Digital Media is dedicated to developing products and services that meet this consumer need and we are thrilled to be bringing this unique TV offering to Australian households.”

The other major Internet video platforms in Australia include Telstra’s T-Box platform as well as bundled offerings available via Microsoft’s Xbox 360 and Sony’s PlayStation 3 platforms. Telstra is attempting to leverage content from its Foxtel joint venture through its T-Box system.

opinion/analysis
It appears as if the FetchTV offering has received lacklustre take-up amongst the customer bases of iiNet and Internode, so far, at least. Neither company has been trumpeting take-up to the world, and at iiNet’s financial results briefings, the FetchTV service has already taken a back seat to more interesting issues.

From my perspective, after seeing the iiNet PVR in operation in trial mode and at a friend’s house, it all comes down to content availability.

The quality of the service is OK (although nowhere near Blu-ray class), but when I’ve had a look at it, I’ve found it difficult to find content that I actually wanted to watch and at a price I was willing to pay. The movies which were auto-downloaded every week simply weren’t that hot, and it didn’t appear when I used it as if there were that many new releases available.

From what I’ve seen, Telstra’s T-Box platform offers quite a wider breadth of content than FetchTV does, especially on-demand content. Of course, it costs more — but what do you expect? It’s Telstra ;)

That mainly leaves the ability to access subscription TV channels cheaper than you could get them through Foxtel or Austar … but again, I don’t buy those services now, so I can’t see myself needing them in future. I, and most other generation Y Australians, have lived our entire lives without pay TV. Why sign up for it now?

Optus made a big deal out of the mobile aspect of its FetchTV partnership back in May this year, when the pair’s romance was first outed, but the launch today of a tie-in app is disappointing due to its lack of mobile streaming. Sure, the other ISPs don’t offer this functionality either, but Telstra does allow mobile Foxtel streams, and it’s not uncommon for PVRs these days to allow remote program scheduling. The independent IceTV platform already does this, as does Foxtel’s own box.

What we’re left with today is an impression that Optus didn’t really try that hard with this one. If this is all Australia’s second-largest telco is offering, you might as well sign up with iiNet or Internode, if you want FetchTV — or just pay more and go with Telstra, and arguably get a better overall service.