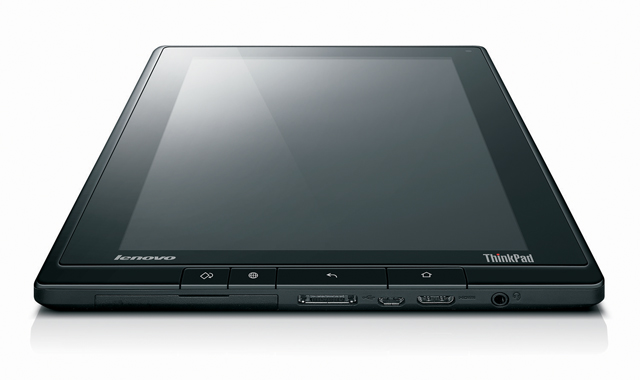 review Change is a good thing. We’ve practically gone cross-eyed from all the identically-spec’d Android tablets that have launched in quick succession, and anything that’s even slightly different is a welcome distraction. The ThinkPad Tablet isn’t a radical departure from the existing tablet fare, but it’s just different enough to carve itself a niche in the business segment – an area that’s also targeted by the BlackBerry PlayBook.

Design
ThinkPad laptops are renowned for their discreet and minimal designs, giving them a certain ‘executive chic’ that’s unmatched by other notebooks. Lenovo has tried to extend the same philosophy to its first ThinkPad-branded tablet, but we’re not sure that it translates all that well. The ThinkPad Tablet is thick, blocky, and not all that modern-looking; if we didn’t know better, we’d think that it pre-dated the original iPad.

We wouldn’t mind its dated appearance so much if it least had the same thoughtful attention to detail as ThinkPad laptops, but it’s lacking in this regard as well. The glossy front is a magnet for dirt and fingerprints, leaving the tablet grubby-looking very quickly, and the hardware shortcut buttons on the right are stiff and difficult to press. Worse, the Home button on our review unit was stuck and barely moved when we pressed it, and the volume and power buttons are small and hard to find.

Flip the tablet over, and the situation improves. Like many ThinkPad laptops, it has a soft-touch finish that feels lovely when you’re holding it, and the Lenovo and ThinkPad branding are embossed in silver lettering. A nice touch is the dot in the i of ‘ThinkPad’, which lights up in red when the tablet is charging or awake; the only downside that it’s located in the bottom right-hand corner – exactly where your right hand would cover it when you’re holding the tablet.

The ThinkPad Tablet certainly doesn’t lack for ports and slots; it’s one of the few tablets to offer a full-sized USB port and full-sized SD card slot, and it also comes with micro-HDMI and micro-USB ports (the latter for charging and transferring files from a computer), a proprietary docking connector, a SIM card slot and a stylus silo.

Features
The ThinkPad Tablet has a lot in common with the current crop of Android tablets, with Android 3.1, a dual-core 1GHz Nvidia Tegra 2 processor, a 10.1-inch 1280×800-pixel display and dual cameras. There are slight hardware differences here and there, but the main thing that sets it from the competition is the N-Trig digitiser that sits on top of the capacitive touchscreen. This responds to input from the supplied pressure-sensitive digitiser stylus, and you can use it for navigating the menu system and taking handwritten notes that are converted to text with the Notes Mobile app.

We wish you could do more with the stylus though. Preloaded apps that let you fill out forms, sign PDFs and annotate documents for instance, would’ve been perfect for business users. It’s not like Lenovo’s shy about deviating from the standard Honeycomb build – the ThinkPad Tablet is bursting at the seams with software. Some of it, like Citrix Receiver, the CompuTrace remote tracking software and PrinterShare, is handy, but there’s lots of bloatware too. For a tablet that prides itself on its suitability for business, there’s an awful lot of consumer software preloaded, including Angry Birds HD, multiple card games, a poorly-designed social networking app and half a dozen media playing apps. Thankfully, you can uninstall anything you don’t want.

Lenovo has also customised the Honeycomb homescreen with a launcher widget and added its own App Shop. The standard Android Market app store is still there, but Lenovo’s portal makes it easier to find tablet-optimised software – something that Google seems to be going out of its way to make difficult. Also, unlike the apps in the Android Market, everything is vetted by Lenovo beforehand to ensure it works properly on the tablet and isn’t a virus or other malicious software. From an enterprise perspective, the extensive servicing, support and remote management options, including the ability to deploy custom images and access to the ThinkPlus Lenovo technicians, make the ThinkPad more attractive than other tablets.

Performance
Considering the near-identical system specs, it’s no surprise that the ThinkPad Tablet performs similarly to other Android tablets – which is to say it’s good, but still a little laggy in places. This is more to do with the clumsy Honeycomb operating system than any shortfall in the tablet itself, given it comes with a dual-core 1GHz processor and a gig of RAM. Using our real-world web browsing test of loading the Sydney Morning Herald website, the ThinkPad Tablet was only a fraction of a second behind the Motorola Xoom, which fully loaded the site in 11.5 seconds. By comparison, an iPad 2 running iOS 5 accomplished the same in 7 seconds.

The handwriting recognition is good if you write neatly in block or cursive letters, and for the most part it’ll ignore your palm pressing against the screen in favour of stylus input only. It’s not so good with other handwriting styles however, and this is where it falls behind the superior Windows OCR, which ‘learns’ handwriting styles either with training up-front or by adapting the recognition over time. But there aren’t really enough features in the Notes Mobile app to justify using it over the old-fashioned pen-and-paper method; you can switch between handwriting and drawing and export the final page to a PNG to text file, but you can’t import documents to annotate (only pictures) or search across notes. It doesn’t even work in landscape mode.

The 10.1in display uses IPS (in-plane switching) technology to enable wide viewing angles and scratch-resistant Corning Gorilla Glass. It’s reasonably bright – although not as vibrant as most of the other tablets we’ve tested recently that use LED backlighting. Audio quality is a big disappointment; for all the music and video apps that are preloaded on the Tablet, the single speaker is only half as loud as we’d expect it to be at full volume (if that), and it’s hollow-sounding besides. Expect to use your headphones whenever you need to do anything audio-related on this tablet.

Our standard battery test, which involves playing videos on loop until the unit powers off (which taxes the battery harder than usual to give an idea of the tablet’s minimum run-time), had the ThinkPad Tablet running for 7 hours and 20 minutes before it stopped playing video, with 15% battery still left in the tank. This is better than the Motorola Xoom, which lasted for only six hours and 32 minutes using the same test, but not as good as the BlackBerry PlayBook, HP TouchPad and Apple iPad 2.

Conclusion
The ThinkPad Tablet is a decent device for business users thanks to the hardware-level security features, preloaded business apps and enterprise-grade service and support – all things that the similarly-priced iPad 2 doesn’t offer. Like the iPad, the ThinkPad Tablet is available in both Wi-Fi and 3G models, with storage available in 16GB and 32GB capacities. The 3G option and ample ports and slots make it a versatile tablet for day-to-day use and it works passably well as a laptop substitute – especially when paired with the optional Keyboard Folio case ($89).

If Lenovo had made better use of the stylus function, however, the ThinkPad Tablet would’ve been a compelling device rather than merely ‘decent’. We wouldn’t recommend it for personal use; despite loading it up with all sorts of end user goodies, the weak speaker and mediocre screen quality make it a poor choice for after hours entertainment.