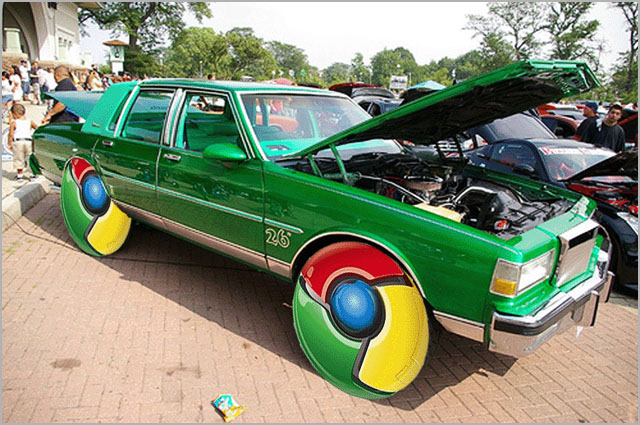 opinion Remember when Linus Torvalds burst onto the world in some sort of Luther-esque declaration that things simply are. Not. Going. To. Be. The. Same. Ever. Again? Linux was here, and it was going to be our new master.

Then, of course, Windows 7 beat the snot out of Linux — which is still widely used by the pale-skinned sysadmin hordes but has had zero impact on the Windows-Mac OS X desktop duopoly. Apart from a small but dedicated community of countercultural stalwarts, early-2000s enthusiasm over Linux as a mainstream desktop platform is gone. With few exceptions, the only penguins you’re likely to see on Australia’s desktops these days are the stuffed ones you get from the Melbourne Aquarium.

I’m reminded of that enthusiasm over Linux when I hear Google spruiking the benefits of its new Chrome OS and those impending devices for which — terms like ‘laptop’, ‘notebook’ and ‘netbook’ apparently being inadequate — Google has invented a new one: ‘Chromebook’.

Just as Amazon redefined a category with its Kindle, Google wants to redefine a category with its Chromebooks. And, while I note great enthusiasm on Google’s part and an apparent curiosity on some end-users’ — Kogan tells me the first two shipments of its early-release Chromebook have sold out, but won’t say how many this implies — I can’t help but suspect that Australians will take to Chrome OS to more or less the same extent as they took to Linux.

That is to say, barely at all.

Why? Because it is, for all intents and purposes, Linux.

Google wants you to believe Chrome OS is some magical new environment where everything runs at breakneck speed and there’s no need for anything other than Google’s online apps. But underneath all the marketing hype and claims of technological wizardry, Chrome OS is just another Linux distribution. It’s based on OpenSUSE 11.4, and says so right there on the startup screen.

Google has just done what hundreds of other developers have done in the past, slicing and dicing Linux for its own purposes. Chrome OS, and its underlying Chromium OS open-source platform, has all the accoutrements you’d expect from a Linux distribution: GNOME desktop, Qt for cross-platform support, Wine for Windows emulation, XTerm, Totem, Picasa for picture management, LibreOffice productivity tools, and so on.

Google has no doubt made many tweaks under the hood and is, to be fair, the kind of company you actually do want to be curating Linux. However, it still won’t make a difference. Die-hard geeks will love Chromebooks, and everybody else will try them and then return them. In the tech world, philosophical outrage quickly wears thin; it’s like those who make a hippie change and then tire of being unable to wash their dreadlocked hair.

Australians are heady adopters of new technologies, but they’re also quick to drop new technologies when they prove to be too much bother. People — and I’m talking about your mum, brother and that girl you were trying to impress at that nightclub last weekend — are technologically lazy at heart, and they don’t care about Linux anywhere near as much as you might.

They don’t want to know about command lines, sudo and apt-get. They just want a computer that lets them do computer stuff without thinking about the fact they’re using a computer — and for most people, ten minutes using Linux is enough to dispel any anti-establishment fervour and send them running from an OS that, while free and lovely and all, has been built for engineers by engineers. Once they realise their new laptop can’t run Crysis, they’ll whinge, and return it, and run back to what’s familiar.

I watched this happen back in 2008, when the shelves of Officeworks’ computer section were lined with Asus’ newfangled Linux-based Eee PC netbooks. I played with them, and you probably did too. But a few months and a zillion new netbooks later, the Linux machines were invariably being heavily discounted to move, while Windows-based devices were positioned front and centre.

All ASUS managed to do was to bring down the entry-level price of Windows 7 — which, given Microsoft’s past Australian pricing proclivities, isn’t an entirely unimpressive result. But these days, even the entry-level Eee PC 1001PQ comes with Windows 7 Starter edition onboard, and none of Asus’ eleven current Eee models ships with Linux. If you want Linux on a laptop, you have to go to the likes of Kogan, which offers Ubuntu in a $389 laptop that is, we understand, guaranteed not to spontaneously combust but is otherwise likely to perform as $389 laptops do.

I say all of this not to ridicule those of you who have chosen to pursue a Linux-filled lifestyle — if a man can marry a goat or willingly buy Battlefield Earth for home viewing, who am I to judge decisions made in the privacy of one’s own home?

Yet I harbour great doubts that Chromebooks will pick up much momentum in Australia, where the market is already saturated with inexpensive laptops that — like the cozy blandness of My Kitchen Rules or the Herald Sun — challenge none of our preconceived notions and let us float along on a comfortable pillow of technological familiarity.

Obviously, Google will get other manufacturers onboard, and it will succeed in making a new market with cool-sounding devices that are basically the same as many sold before. Of course, Microsoft has managed to convince several hardware makers to test the Windows Phone 7 market but that doesn’t mean they’re rushing out the door yet.

Google is, to its credit, trying: It’s backed efforts to promote HTML5 versions of popular games like Angry Birds, and when the devices ship here later this year I’m told we can expect Chromebooks to be bundled with 3G access on a $30-ish-per-month payment plan. Optus, for one, did similar deals with Windows netbooks that have been so popular that the company currently offers a grand total of one such bundle for its SMB customers; consumers that Optus once tried to lure with Linux-based netbooks are pushed towards tablets instead).

Google has also been pushing Chrome OS through partnerships with the likes of Virgin America, which is offering loan units for use during domestic flights within the US, and New York’s Ace Hotel, which will loan you a Chromebook and free WiFi/3G for the duration of your stay.

Expect Chromebooks to soon appear at cultural events, music festivals, domestic airport lounges; could it be long before Google is offering psychedelic-coloured Chromebooks at the Big Day Out, and placing them in the hands of high-profile AFL players to spruik with awkward commercials?

But getting Australians to pay for something is much different than putting it in front of them, or letting them borrow and use it for free. When Chromebooks enter full retail mode, they’ll be once again pitting Linux against the tried-and-proven game-winning credentials of Windows 7 and Mac OS X. If the history of Linux-only laptops in Australia is any indicator — the place they’ll be moving the fastest will be through deal-of-the-day inventory liquidators.

Chrome OS may be all shiny and new now, but Google is taking a lot for granted in hoping that it can turn Australia Chrome overnight. Without some killer apps that you can’t get by loading the Chrome browser on the computer you already have, I suspect the world will quickly realise that a kilogram of Chrome OS carries exactly the same weight as a kilogram of penguin feathers — which is to say, not very much at all.

Prove me wrong: I would love to hear why you think we should care about Chrome OS.