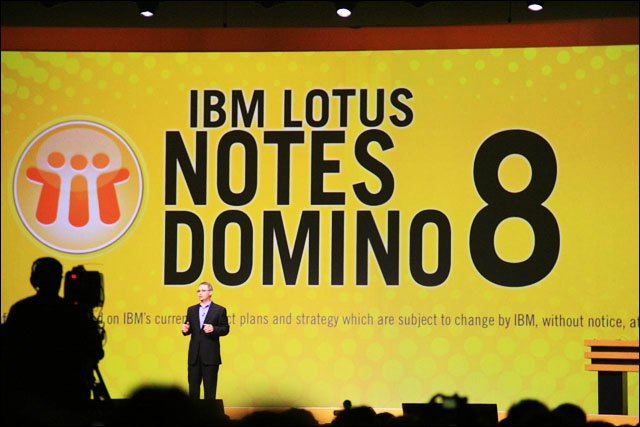 update Microsoft has inserted yet another nail in the coffin of IBM’s Lotus Notes/Domino suite and is hammering it home, with the company and partner Telstra convincing furniture specialist Steinhoff to dump its Lotus installation and shift to the Telstra-branded version of Redmond’s Business Productivity Online Suite.

Steinhoff operates the popular Freedom Furniture, Snooze and Bay Leather Republic brands, and has a substantial presence in the Asia-Pacific region — with 154 retail outlets and some 2,500 employees.

A statement published this morning by Telstra, Microsoft and partner HubOne revealed the company had bought some 1,050 BPOS seats through Telstra’s T-Suite portal. BPOS operates on a hosted model, with customers getting access to products such Microsoft Exchange, SharePoint and Office Communications Server and Live Meeting through a web browser.

The company is believed to have been previously using IBM’s Lotus Notes/Domino package, although the migration to BPOS is not yet complete.

400 of those staff will be limited in the feature set they receive, as they will receive collaboration tools through what Microsoft describes as its Exchange Online Deskless Worker tier, while the other 600-odd will have access to the full suite of BPOS tools.

HubOne will manage migration of Steinhoff’s services to the cloud, with the company expecting the integration process to be complete by May. ”We are absolutely delighted to have played a part in this success,” said HubOne managing director Nick Beaugeard. “Once again, this proves the viability of the new cloud computing business model for all industries, regardless of size or vertical focus”.

Steinhoff Asia-Pacific IT manager Clive Nichols said in a separate statement that the on-premise version of Notes the company had been using was “out of vendor support”, and as a result Steinhoff was experiencing technical and compatibility issues

“We found that by implementing BPOS, Steinhoff will not only be able to address these issues but will be able to reduce our email and Blackberry operating expenditure by approximately 10 percent,” he added. “This is without even factoring the infrastructure capital savings resulting from the fact that our email servers will no longer require a refresh. The solution will also provide Steinhoff with good scalability, simplified management and a platform that will allow a speedy deployment of further communication enhancements at an appropriate time.”

The executive notes that the terms and conditions of the BPOS deal were still being finalised, but once these were done, he expected a 10 to 12 week deployment time for the new systems. Steinhoff considered various options for its future email platform, he said — on-premise Exchange, on-premise Domino, hosted Exchange and Domino in the cloud (Lotus Live).

Some organisations have flagged a reluctance to host their email in Microsoft’s cloud because of the fact that the data will be hosted overseas, instead of in Australia in a local datacentre.

“Overseas hosting was certainly a factor in the decision making process,” said Nichols, “but we are very satisfied that Microsoft Exchange Online/Telstra will meet our email security, speed and reliability requirements. Steinhoff will not be using the solution to host customer sensitive information (for example customer credit card information, customer details etc) and so in terms of a cloud deployment our risk is reduced.”

In terms of other major projects, Steinhoff is also in the final stages of the tendering process for a desktop refresh, he said.

The news comes as large Australian organisations are increasingly dumping Lotus Notes/Domino wholesale, with many seeing it as a legacy platform unsuited to modern enterprise needs.

In February last year, national airline Qantas confirmed it would ditch IBM’s suite for Outlook/Exchange, and other such as Coca-Cola Amatil and AMP have done the same. Microsoft appears to have been the primary beneficiary from the moves, although a number of Australian organisations have also deployed Google’s Apps suite instead.