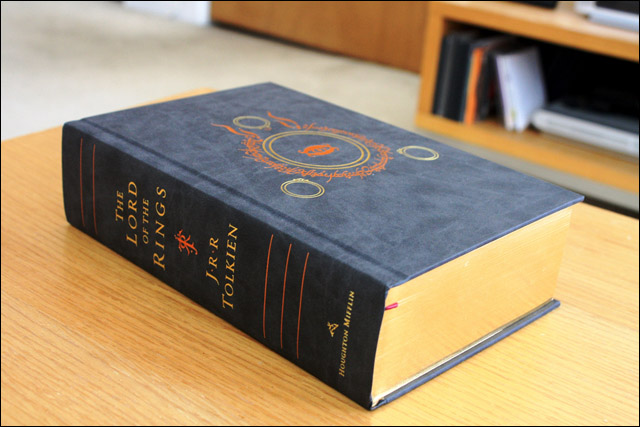 When you ask Google’s Mark Tanner what books he’s been reading recently, you had better have a few minutes to discuss the subject, because the enthusiasm bursts out of him wholesale. “I just finished Slaughterhouse Five by Kurt Vonnegut,” he says, referring to the science fiction classic. “Fantastic read.”

Lots of people in Australia’s IT industry are into sci-fi — and we’re betting many Google staffers love fantasy too. But sports books are also on Tanner’s radar. He’s also been recently reading Andre Agassi’s autobiography, Open, for example, which chronicles the life and times of the international tennis megastar. And then there’s Greg Mortenson’s Three Cups of Tea — an inspirational read which tells of the author’s gargantuan yet human effort constructing schools across Asia.

Hard science is also on Tanner’s shelf; “I started reading A Brief History of Time,” he says, referring to the popular book by British physicist Stephen Hawking, “and like everyone else failed by the sixth chapter”. Now he’s reading Hawking’s follow-up book A Briefer History of Time.

In a way, you might say, Tanner’s a typical book buff — multiple books on the go, in multiple genres, some unfinished, a giant set of bookcases at home with volumes gathering dust and piled everywhere. However, Tanner’s not just any book industry executive — he’s Google’s strategic partner development manager in Australia for the publishing industry. And so it’s the way he has increasingly started reading books that gives us a clue into the future of book publishing.

For example, when the executive was reading Agassi’s autobiography, he says, he wasn’t just flipping through the pages of a paper tome. Instead — because he was reading the book through a web browser — he kept on taking advantages of the inherent strengths of the emerging digital medium.

“You’re reading online, and then you come across this match he talks about,” he says. Then, Tanner says, you open a new tab in your browser and Google the match Agassi’s describing, to find a YouTube clip of the highlights. Or, he adds, “you come across an old tennis player you haven’t heard of” — and Google them.

“I regularly read on my phone,” he says. “I used to read a lot on e-ink devices — I’ve tried them all. I surprise myself by how often I’ve been reading on my laptop.” Anything’s appropriate, according to the executive — as long as “the device doesn’t get in the way” of the experience.

In early December this year, the search giant unveiled what it calls its Google eBookstore, with more than three million titles available for book buffs to choose from and read on many devices — including hundreds of thousands of books available for sale.

In doing so, Google has followed in the footsteps of some giant rivals — companies like Amazon, Apple, and in Australia, the Borders/Kobo alliance, already have substantial eBook presences, millions of customers and are growing fast in the new digital publishing world. However, speaking to Tanner in an interview this week, it seems as if Google has come at the eBook problem from a different angle.

The search giant has long — as part of its mission to “organise the world’s information and make it universally accessible and useful” — had a product which has been taking the metadata available in books and making it searchable public on the web, in coalition with publishing partners.

With a preview also available, the program has become a powerful marketing tool for publishers who want to expose their books to more readers online. After previewing a book, readers could then click through to a retailer to buy it. However, Tanner says the company’s next eBook step — its eBookstore — has resulted from organic conversations with publishers, who wanted an ecommerce layer on top of Google’s existing functionality.

Google’s eBookstore will also integrate with local booksellers’ websites, connecting up the dots in the book ecosystem, from author, to publisher, to digital platform and retailer.

The only catch? Google eBooks isn’t available yet in Australia — at least not for book purchases. So far it’s limited to US customers, although companies like Apple, Amazon and Borders already have paid eBook options available down under. We gave Google a hard time for this when the product launched — but Tanner’s presence and energy in Australia has done much to reassure the search giant’s Australian division is on the case.

Tanner says Google is “pushing to take this internationally as quickly as we can”, and emphasises that Australia is in the top group of countries the search giant is focused on rolling out Google eBooks to.

There’s “a range of factors” which have to be worked out for the product to hit Australia, he says — from retailer integration, working with publishers, getting book editions right, integratingt he right currency and even working with different teams within Google — those focused on the Checkout and Android technologies, for example.

The good news, however, is that the US launch of Google eBooks went “spectacularly well”, according to Tanner — which bodes good things for Australia. And Google has also recently been talking up the potential for the platform to launch internationally in the first quarter of 2011 — meaning Australia could see some action very soon.

The ecosystem
One of the things which readers complain about most with eBooks is the patchy availability of titles. When Delimiter did a survey of the eBooks available from Amazon on its Kindle device in July, for example — shortly after Tanner was appointed — the US book giant came up a little short.

Many popular Australian authors, such as Bryce Courtenay, for example, didn’t have any eBooks available in the Amazon store — and most of the rest we could find, for example, David Malouf, Tim Winton, Helen Garner and DBC Pierre, only had some of their books and not all. In addition, the overall number of books in the Australian version of the Amazon store suffers when compared with the US version.

Tanner (pictured, right) is in a somewhat unique position in the Australian publishing market — constantly talking to local publishers and even authors about Google’s offerings. As such, and with several years of history in the market, he has a more granular insight into why the availability problem occurs than most.

The executive says it’s no secret that digital publishing is on the verge of becoming mainstream — “it’s been coming for 10 to 12 years,” he says, noting in the past three years the topic has become “very strong” in the market, with a lot of eReader products launching and discussion in the media. However, where publishers were fearful of the disruptive phenomenon in the past, he says, now things have changed — with “publisher after publisher” that he’s talking to being enthusiastic about it — and the authors keen as well.

Complicating this, however, according to Tanner, is the tricky contracts between publishers and authors, which often vary even between the same author’s books, and haven’t always covered digital rights. The better publishing houses have changed their contracts to take digital publishing into account, he says, “but it’s a long, hard slog” in terms of the back catalogue.

Publishing rights are usually allocated by territory — for example, for the UK and US markets separately, but some publishers are pushing for global digital rights. Tanner says the licensing situation made sense historically for the paper medium. “I think over the next few years it will probably get sorted out and become a little cleaner,” he says.

But in general, the Google executive believes publishers understand readers’ complaints when books don’t launch in Australia at the same time as they do globally, and when eBook formats aren’t available at launch to suit readers’ viewing platforms. Partly, it’s because if publishers don’t capitalise on initial global marketing of a book by having it available on launch day, their sales could suffer.

It’s a similar situation when it comes to Australian book retailers.

“Everyone knows that it’s coming,” says Tanner, and the retailers want to be proactive about the eBook revolution. But it can also be expensive. Initially, Google is focusing on an affiliate model which allows retailers to get a percentage of sales for referrals, but the company also wants to work on more substantial integration projects with the retailers.

“There’s very, very strong enthusiasm for that locally,” he says. And it’s not hard to see why — local retailers should eventually be able to benefit from Google’s global relationships with thousands of book publishers worldwide. The retailer will be able to “own the experience” on their own site, but have their back end powered by Google.

However, initially Google will focus on larger projects down under — as retailers will need to have a website with very strong internet capacity, to handle the massive feed of Google book data the search giant will funnel to them.

Authors
Another possible aspect of the future publishing industry is that individual authors will take distribution into their own hands and sidestep publishers altogether, using platforms such as the ones offered by Apple and Google to go directly to readers.

Tanner notes that to a certain extent, this has already started happening, highlighting the success of New York Times bestselling author Lisa Genova internationally, with her book Still Alice. After a frustrating year attempting to deal with the publishing industry, Genova set up her own web site, with an associated blog, to market her book, which deals with the disease Alzheimers’. And the move was successful — the book started selling well online.

However, Tanner says in his opinion book publishers are still going to be important in the market — not only do they provide editorial support to authors, but they just have stronger knowledge and existing links with distribution platforms, which can make the critical difference for a book.

He points out Genova only went so far with her book when it was self-published — it took a major publisher to take her the rest of the way. “Yes, you can work with Google and other places online to sell books online if you are an author,” he says. “But I think publishers bring a lot more than an ability to bring books into Google.”

Ultimately — and as has been previously chronicled — Australia’s eBook market is an evolving space, and Google is likely to take a place as one of a handful of large companies jockeying for market share and audience attention. And at the moment most of those companies — Amazon, for example, and Apple — have only tiny prescences locally when it comes to interacting with the publishing industry.

The amount of local resources Google has thrown at eBooks isn’t huge either — but if Tanner’s passion is anything to go by, it may make a sizable splash. The executive says one of the “wonderful” things about his job is that he gets given free books whenever he visits publishers. Consequently, he’s got a big pile of about 35 to get through when he kicks off his summer break shortly.

Only “five have been started”, he says. But that’s OK — a good book lasts forever.