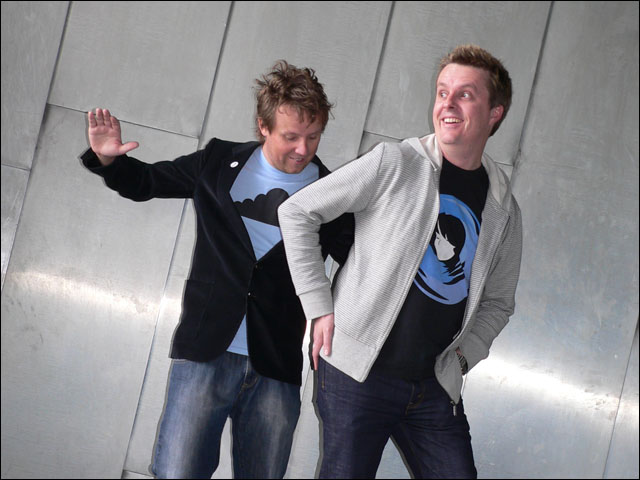 Along with his co-founder Bevan Clark (above, right), Guy King (above, left) today became one of Australia’s newest multi-millionaires, as his company’s RetailMeNot site was snapped up by emerging US media player WhaleShark Media for around $90 million. But speaking with the entrepreneur this morning, you get the feeling it hasn’t yet sunk in.

“When I launched the site, I honestly didn’t even consider that I’d be able to make any money from it,” King says. “It’s quite surreal.”

Like fellow Australian coupon startup Jump On It, which last month secured $5 million in funding from a similar US company, LivingSocial, RetailMeNot is one of a growing number of sites globally which are cashing in on an online trend towards using coupons or group buying to obtain discounts from traditional retailers of goods and services.

It’s a trend which has seen multinational sites like Groupon and LivingSocial spring up to become billion dollar enterprises almost overnight. The US technology sector is buzzing with rumours that Groupon will be bought by Google for $6 billion, and overnight Amazon announced a $175 million investment in LivingSocial; and no wonder — the company is projected to top $500 million in revenue in 2011.

The key difference between this new crop of billion-dollar success stories and RetailMeNot? King and Clark can lay a fair claim to helping start the whole movement, more than half a decade ago.

King says the whole cost of starting RetailMeNot was “probably around the $30 mark” in total at the time — with the money going towards registering the domain name and setting up web hosting.

From then on in, the entrepreneur describes the process of building RetailMeNot to where it is today — with around $30 million in revenues this year and some 90 million global unique visitors over the past year — as being “a lot of sweat”. He says there weren’t any really hard pain points or tough bits in his company’s evolution — but it needed to keep on moving so that it could deal with the site’s increasing scale.

Getting the precise model right for a startup that will eventually lead to it growing hugely is a hard ask. But, when asked about his company’s success and what advice he would pass on to other startup entrepreneurs, King says they should follow their heart.

“I think people should do what they love,” he says. “Scratch itches that they have.”

If they are solving problems that many people have, the money will eventually come. “Our success from a large part has come down to being useful to as many people as possible, and the revenues will follow,” says King. “I think people should invest their energy in being useful.”

With RetailMeNot already making millions of dollars in revenues, King and Clark could already be classed as independently wealthy.

But the RetailMeNot acquisition will vault them into the highest ranks of Australian dot-com millionaires, as their company, Stateless Systems, has never taken any external funding, and was entirely bootstrapped with their own money. They own the company and all of its assets personally.

King says after the acquisition he might take a bit of time out to spend with family and travel. But the two founders are “pretty down to earth”, he says — they don’t drive flashy cars around town or flaunt their assets.

One group of stakeholders who will benefit from the acquisition is Stateless’ other employees — about 15 in total, mostly “very talented developers”, five of whom work directly on RetailMeNot. King says the staff will most definitely benefit from the acquisition — the company wasn’t obliged to reward them, but the staff “had been a large part of our success, so it makes sense”.

As the acquisition will be paid for partly in cash and partly in equity, King and Clark will also retain a “substantial” stake in WhaleShark Media, and will continue to be involved with the company going forward, although responsibility for day to day operations will now be handled from the acquirer’s US office.

However, it’s not as if Stateless has nothing else on its plate. With a slew of other sites including the notorious BugMeNot site and the popular CushyCMS platform which will continue to be developed, King says it will more or less be business as usual, despite his newfound wealth.

“We’ve actually got a new product due next week,” he says. And of the future: “I think it’ll be pretty similar to what we’re doing now — we just love building web apps. So I think we’ll continue to do that.”

Over the past 12 months Australia’s technology startup community appears to have started gathering a degree of momentum. Large venture capital firms such as Accel Partners have pumped millions into local companies like Atlassian and OzForex, and a number of seed funding organisations like Startmate have also commenced operations.

Kind says he believes its important for startup founders to realise success is possible in Australia, despite its remoteness from global technology hubs like Silicon Valley in the US. “In some ways it has worked to our advantage that we haven’t been part of the [Silicon Valley] scene in the US — it allowed us to focus and not pay too much attention on the established rules of doing things,” he says.

“I think some Australian startups seem to almost have a confidence issue — they don’t think they can be a player on the international scene. But there’s a lot of really bright people in this country.”

And if RetailMeNot’s example is anything to go by, the potential for this lucky country is sky high.