When we gently teased VMWare Australia managing director Paul Harapin for entering the race to win a spot on the trustees board of the Sydney Cricket & Sports Ground on Tuesday, we had no idea that there was much more to the story.

After we dispatched our crack team of investigative journalists to get more background on the story, we found several alarming facts. First, it looks like Harapin is actually running against another IT industry stalwart — former St George technology chief Peter Clare, who is now Westpac’s group executive of Consumer Services after switching teams with Westpac CEO Gail Kelly. 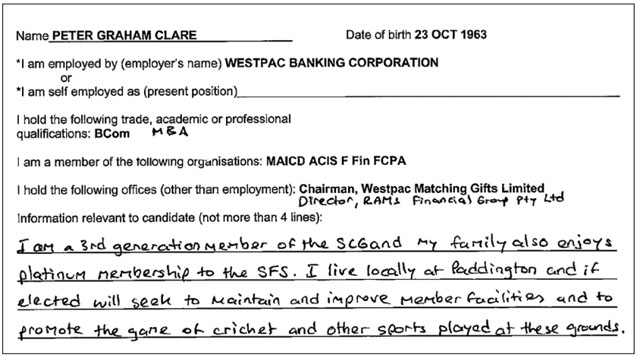 We can’t be sure it’s definitely that Peter Clare, but his directorship of RAMS and the fact that both Peter Clares have a Bachelor of Commerce and a Masters in Business Administration does make it likely. Of course, Clare doesn’t have responsibility for technology at Westpac now (that’s Bob McKinnon’s department), so it’s unlikely there is much conflict from Harapin’s side — VMWare won’t be selling Clare any virtualisation gear any time soon.

However we think the following candidate might be the toughest hurdle for Harapin to beat: 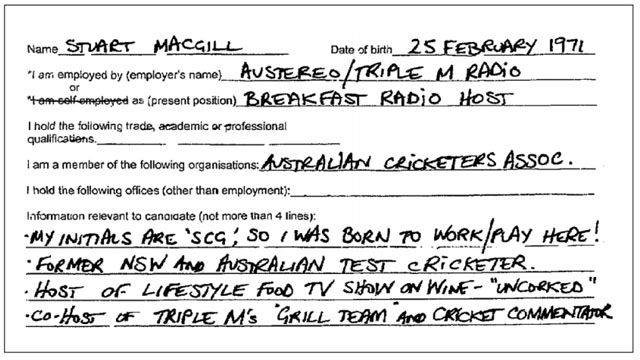 Also, through one of our loyal readers (who bears the unusual name of “Robotic Buttocks”), we’ve also found out that one of the other candidates, KPMG chartered accountant Simon Thorp, is taking the race so seriously, that he has started advertising his candidacy on Google AdWords:

Bloody hell! Poor old Harapin is going to have a tough time in this race for the SCG board. So we decided to give the poor VMWare MD a little help along the way. 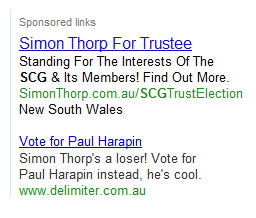 Note: The ad may not always appear as we only have a low budget. Image credits: Screenshots of Google and Sydney Cricket Ground documents publicly available.