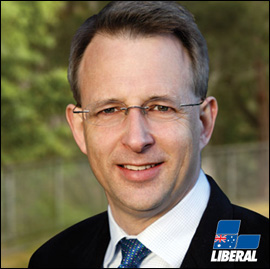 Former Optus executive and current Liberal MP Paul Fletcher has thrown his hat back in the telecommunications ring in a high-profile interview with radio shockjock Alan Jones, going some way to backing his former opponent Telstra against proposed government intervention.

Fletcher was late last year elected as the Federal Liberal member for the NSW seat of Bradfield, a tenure that Jones described as having been a “novice” politician for “five minutes”. Previously he was the director of Corporate and Regulatory Affairs for Optus, where he had a high-profile role criticising Telstra.

Since his election, Fletcher has been relatively absent from the contentious telecommunications portfolio, which is held on the Opposition side by MP Tony Smith, despite his expertise on the subject.

In the interview, Fletcher repeated the Opposition line that the Government was not paying any attention to protecting the interests of Telstra shareholders in its proposed legislation to break the telco into wholesale and retail divisions.

He said the telecommunications reform legislation proposed by Communications Minister Stephen Conroy — currently deadlocked in the Senate — was an attempt to split up Telstra to try and make the $43 billion National Broadband Plan “less uneconomic than it already is”.

Fletcher further defended Telstra against the Government proposal that it might be blocked from buying further mobile radio spectrum. “This mobile spectrum is vital to the future of Telstra, because it’s for the next generation of mobile telephony. They need to be allowed to bid for it, and the govt is threatening that they be barred,” he said.

The entire interview is available online at the website of Jones’ station 2GB (MP3).

Before his time at Optus, Fletcher also worked as a telecommunications advisor and chief of staff to former Communications Minister Richard Alston.

He is also the author of Wired Brown Land? Telstra’s Battle for Broadband, a book which examines the history of struggle for the broadband market in Australia.