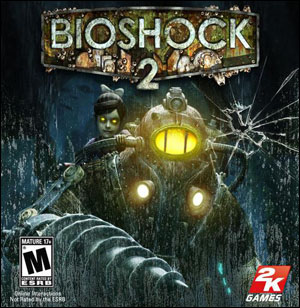 The game has been developed by 2K Games, although it remains unclear to what extent the company’s Australian division has been involved in its creation. BioShock 2 is the follow-up to 2007’s original BioShock game, which received widespread critical acclaim, especially for its atmosphere and plot.

BioShock 1 was set during 1960, in the fictional underwater dystopia known as Rapture. The sequel is set a decade later, with the player being case as one of the monstrous ‘Big Daddy’ genetically modified creations of the original game. The game will be available on PlayStation 3, PC and Xbox 360, and has been classified MA15+ in Australia.

Gamer and 21-year-old computer science student at Adelaide University, Lachlan Birdsey, has pre-ordered a collector’s edition of BioShock 2, which along with the game includes a book of art, a 12″ vinyl LP with the orchestral soundtrack from the first game, an audio CD with the BioShock 2 score, and some codes to unlock certain multiplayer features.

Birdsey said he was most looking forward to playing as a Big Daddy — some of the most dangerous enemies from the first game. “That’s the big thing,” he said.

But he also wants to see where the gripping story from the first game will go. The plot and character development in the first BioShock game was driven by Ken Levine, a well-known video game designer and writer who has worked on a number of popular games such as System Shock 2 (which features a similar style to BioShock), Thief: The Dark Project and Tribes: Vengeance.

“The story for the first game was mind-bogglingly impressive,” said Birdsey, who noted he was also a big fan of System Shock 2. The gamer said he hoped the story in BioShock 2 was as good, despite Levine’s absence from the BioShock 2 development effort.

Although BioShock 2 will be available for the PC, Xbox 360 and PlayStation 3, Birdsey has pre-ordered the PC version, as he said he prefers to play first person shooters on that platform, due to the greater degree of precision allowed by a mouse, compared with a console control pad.

Other major games to launch in Australia this week include Star Trek Online and MAG.